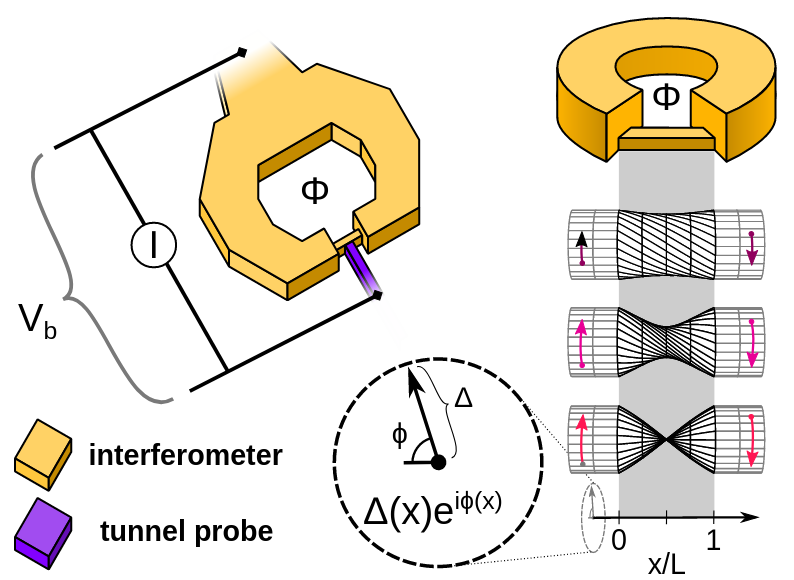 Phase-driven collapse of the Cooper condensate in a nanosized superconductor

Superconductivity can be understood in terms of a phase transition from an uncorrelated electron gas to a condensate of Cooper pairs in which the relative phases of the constituent electrons are coherent over macroscopic length scales. The degree of correlation is quantified by a complex-valued order parameter, whose amplitude is proportional to the strength of the pairing potential in the condensate. Supercurrent-carrying states are associated with non-zero values of the spatial gradient of the phase. The pairing potential and several physical observables of the Cooper condensate can be manipulated by means of temperature, current bias, dishomogeneities in the chemical composition or application of a magnetic field. Here we show evidence of complete suppression of the energy gap in the local density of quasiparticle states (DOS) of a superconducting nanowire upon establishing a phase difference equal to pi over a length scale comparable to the superconducting coherence length. These observations are consistent with a complete collapse of the pairing potential in the center of the wire, in accordance with theoretical modeling based on the quasiclassical theory of superconductivity in diffusive systems. Our spectroscopic data, fully exploring the phase-biased states of the condensate, highlight the profound effect that extreme phase gradients exert on the amplitude of the pairing potential. Moreover, the sharp magnetic response observed near the onset of the superconducting gap collapse regime can be exploited to realize ultra-low noise magnetic flux detectors.